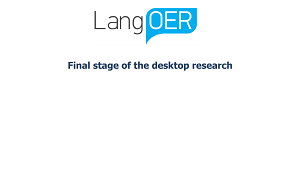 The desktop research of OER in less used languages started with exploration of existing OER repositories in the partner languages of the project, Dutch, Frisian, Greek, Latvian, Lithuanian, Polish, and Swedish together with English as a reference language.

Each partner made an overall investigation of existing repositories and open learning sites to map out what OER picture looked like, specifically from a language learning perspective. Based on the preliminary findings as well as the expert survey of OER the state of the art investigation was made by the project partners of the partner languages. The investigation was extended to embrace more European languages and eventually the study consisted of 22 languages. The investigation also included a more global overview by using languages such as French, and German. Finally, the following languages were included in the investigation: Catalan, Danish, Dutch, English, Estonian, French, Frisian, Finnish, Flemish, German, Greek, Hungarian, Icelandic, Italian, Latgalian, Latvian, Lithuanian, Norwegian, Polish, Romanian, Swedish, and Welsh.