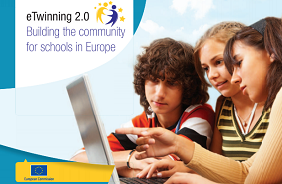 2010 eTwinning book on people using ICT and, in particular, teachers using eTwinning as a tool.

This book, as it is, could not have been written in 2005 when eTwinning began because one could not have dared to propose it as a teachers’ social networking environment. The now popular social networking platforms, such as Facebook or MySpace, were still in their embryonic phase at the time and even then, they were created with a lower profile hoping that by putting people with similar interests together on a dynamic website, something would happen, let’s say, naturally. eTwinning 1.0 was born in 2005, but it took four years to realise that it was already 2.0 by nature. eTwinning was a teachers’ social network before its time. As soon as we recognised just how much teachers were communicating, sharing ideas and getting together well beyond school project development, what we needed to do was to provide more tools to unleash the inner potential of the community – composed of over 60 000 teachers in Europe – and finally declare, as we did in the autumn of 2008, that eTwinning 2.0 was live.